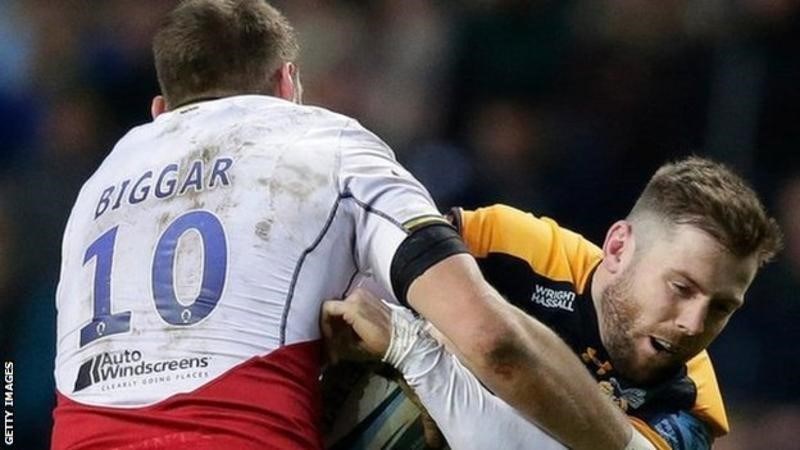 Wasps ended their run of five straight league and cup defeats by beating Northampton to earn only their third home win of the season.

After taking a 14-3 lead with converted scores from Josh Bassett and Juan De Jongh, Wasps were dragged back to only 17-16 up at the break.

But Willie Le Roux added another try, converted by Lima Sopoaga, who kicked his second penalty to seal victory.

Following last weekend's 20-13 defeat by Harlequins at Twickenham, Wasps had won just once in 13 games in all competitions.

But this victory pushes Dai Young's side back up to sixth, within four points of third place, three places (and three points) above Northampton, who failed to back up last weekend's win over leaders Exeter.

After almost 20 minutes of stalemate, it was South Africa full-back Le Roux who created the opening for winger Bassett to go over in the right corner.

It sparked a sudden frenzy for the scoreboard operators as Sopoaga converted, Biggar kicked his first penalty, then centre De Jongh followed up his well-judged kick ahead to nick the ball ahead of Saints' full-back Ahsee Tuala and race away to score for an opportunist try.

Then came a third try in the space of eight minutes, this time from the visitors, when Cobus Reinach sent Dingwall clean through, Biggar converting that and then two more penalties to Sopoaga's one.

It proved a little less hectic after the break. After Thomas Young's early second-half try had been chalked off, and Elliot Daly was off-target with a penalty attempt from inside his own half, Le Roux was then gifted the chance to score Wasps' third try, before Sopoaga's conversion and 65th-minute earned some breathing space.

"It was just about the result today as it was more important than anything.

"We showed a lot of commitment and we are a quality team when we get quick ball, but some of our kicking game was sloppy.

"We should have won more comfortably as I thought Thomas (Young) scored a fair try. He played really well today as he's an international rugby player not playing it at present."

"We both needed the win but they won most of the crucial moments in the game and to be brutally honest we didn't deserve to win.

"I thought Cobus [Reinach] clearly touched the ball down before their crucial try and Luther losing the ball over the line summed it all up for us.

"For us it was two steps forward and one back as it was a flat performance and we've got to find a way to stop that happening.

"The league is tight so it's difficult to get on a run and there's a lot of water to go under the bridge, but we need to improve."

Not used: A Harris, Hampson, Searle.