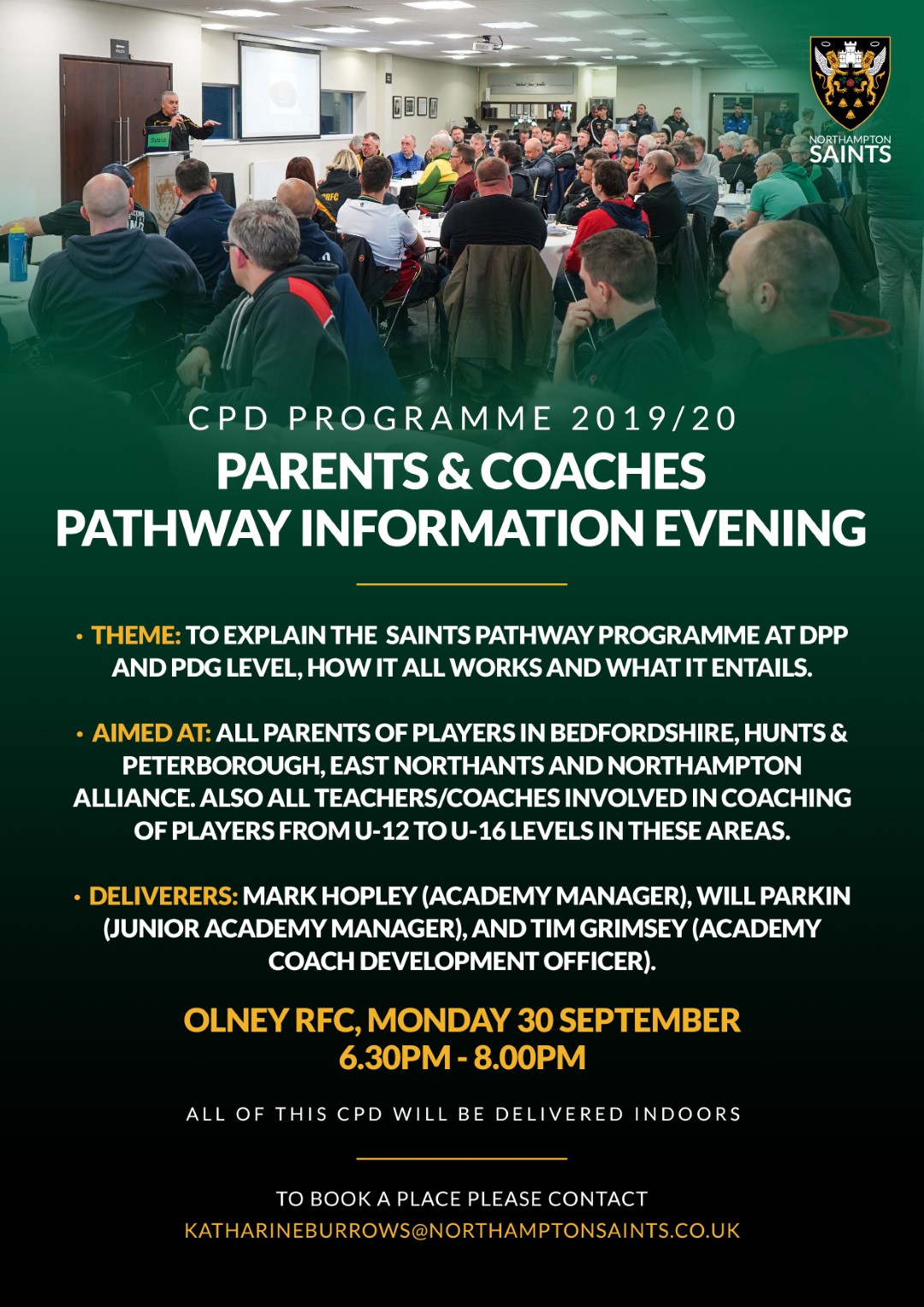 Developing Player Programme
Northampton Saints' Developing Player Programme (DPP) aims to be a world-class centre of excellence for developing well-rounded rugby players, who have the skills to realise their potential in rugby and in life.
The DPP was launched in 2013 in order to find the next generation of stars, and aims to instil the values of SPIRIT at all levels; Sportsmanship, Pride, Innovation, Respect, Integrity, and Teamwork.

The ambition of the programme is to engage with even more players and coaches, providing a greater opportunity for us to support a player's rugby development.

From the 2018/19 season onwards, the U13 to U16 DPP has moved from the Academy into a Community-based programme. The Academy will, instead, focus on the U16 & U18 Player Development Groups.

ABOUT THE DPP
The DPP is a development programme that compliments school, club and county playing programmes, providing further development opportunities without the conflict of competition.

It is a national programme managed by the RFU and delivered locally in partnership with the RFU, Regional Academy and Constituent Bodies. Each programme is established within the 14 Regional Academy boundaries, with the ambition of ensuring young people are enjoying the game for longer and into their adult years.

Delivered alongside regular participation programmes in school, club and Constituent Bodies (CB), the programme is designed to provide enhanced development opportunities for the best young players.

While a key objective by the end of the programme is to identify players with the greatest potential to enter the pathway towards the professional game and England, the initial emphasis will be on nurturing a player’s attainment of skills, game understanding (principles of play) and athleticism.

The DPP will focus on providing a learning environment for players, with guidance on creativity, awareness, resilience, decision making and self-organising (CARDS) within the game. The CARDS skills accelerate players’ ability to adapt to the game by exploring the boundaries of their capabilities. Members will also learn about key components of performance to readily equip them with attributes most important to their long-term development.

PLAYER NOMINATION
How do players get nominated for DPP trials?

In order to be eligible for selection into each DPP a player must either: (i) have their permanent home address or school address located in the region and/or (ii) be registered as a player at a rugby club located in the region.
September: U14, U15 and U16 clubs are invited to take part in a pre-season festival, and asked to bring every player and give them equal game time. At the end of the festival each club coach is asked to nominate players from other clubs who they feel should be invited to attend the final trial.
During the same period as the festivals, schools are asked to nominate any athlete or player that is not playing at a rugby club that may have the athletic potential to attend the trial.
Any player that was involved in the previous year will be invited to the final trial, but is also encouraged to play in the club festivals.
Approximately 60-80 players will be invited to attend a final trial, where a squad of 25-30 players will be selected for training.
Throughout the programme, players are encouraged to self-evaluate against their strengths and development areas and seek feedback on their progress. The majority of player feedback will take place within training sessions in the form of verbal and non-verbal formats to help support the player. Feedback and self-evaluation forms the basis of a player’s involvement in the programme.
DELIVERY FRAMEWORK
Under-13: Maximum of 12 hours contact time, starting from February half term.

Under-14: Contact time will be within a bandwidth of 20-30 hours, starting from October and including two festivals.

Under-15: Contact time will be within a bandwidth of 20-30 hours, starting from October and including three festivals.

Under-16: Maximum of 12 hours contact time, starting from October and finishing by December. Includes one festival.

COUNTY RUGBY
Players involved in the DPP may also be involved in more than one environment: school or club.

It is important to recognise that the DPP is not instead of but additional to their normal place of engagement.

County rugby provides an opportunity for players to represent their county at Under-15s to adult level, with the aim of providing a competitive and enjoyable experience for all.

Players involved in the DPP at Under-15s and Under-16s may also be selected to represent their county. If so, the DPP framework ensures that participation in the programme does not conflict with their involvement in CB programmes.

COACHING
Coaching in the DPP is rewarding and exciting. Creating an environment that challenges, is progressive and supportive will contribute greatly to a player’s development.

Personal development, provided at no cost, will be a key benefit to all coaches delivering the programme. Coaches will be offered a range of support and will be expected to create and drive their own personal development plan.

A DPP coach must demonstrate significant commitment to their personal and professional development and should have an understanding of the following player centred coaching skills;

Adaptive games using conditions, constraints, consequences and rewards identifying development through co-coaching, observation and individual feedback.
Feedback through freeze, huddles, prompts and questioning the recruitment and appointment of coaches will be the responsibility of the Regional Academy and managed in conjunction with the CB.
Tweet
Tweets by @@Lbrfc